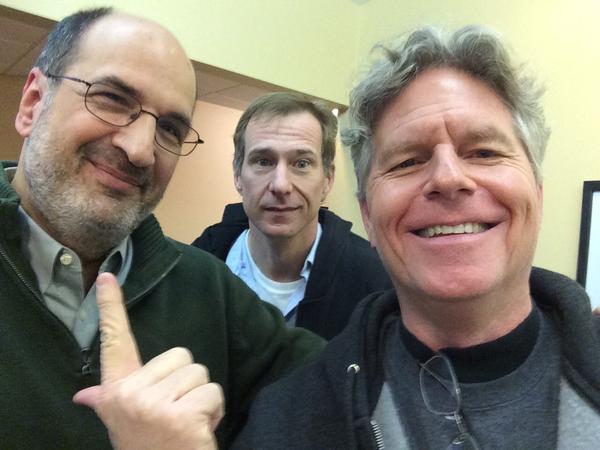 Austin Tichenor and Dominick Conti — two-thirds of the Reduced Shakespeare Company* — were in the studio with me to talk about their latest production, “The Complete History of Comedy (Abridged). We took it from the beginnings (cave comedy) through Abe Lincoln’s standup comedy and into modern times, and I had Austin perform his signature song from the show, “I Laughed Till I Cried,” which references pretty much every important comedy figure of our lifetimes.

We also talked about the RSC having its Bible show banned earlier this year in Northern Ireland, what it’s like to play in China, and how many venues are probably putting on one of the nine distinct RSC productions somewhere in the world tonight.

*Reed Martin, the other third of the RSC — and co-creator of their shows with Austin — couldn’t join us because he was doing a theater workshop at Washington University this afternoon. FYI, in the photo above, that’s me on the left, Dom in the middle, and Austin on the right.