A Toilet Too Far 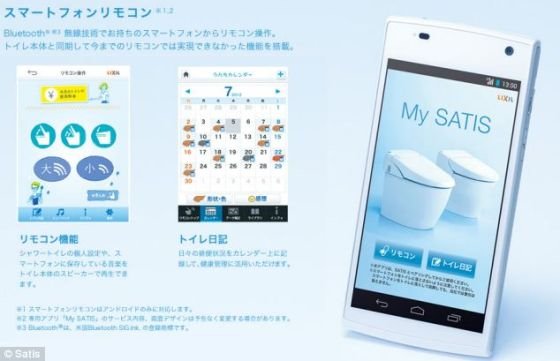 When you’re trying to figure out what to buy as a present for me, here’s one thing you can cross off your list — a luxury toilet from Japan that includes automatic flushing, a bidet spray, music, and fragrance relief, all controllable via a smartphone app, for the low, low price of $5,686.

Let’s start by pointing out that if you need a smartphone app to flush your toilet, you are way too spoiled. You have taken laziness to a whole new level. Do you need the app because you used to have a servant who flushed the toilet for you and you’re saving money by automating the process? Even the Sultan of Brunei would say that’s over the top. Just reach back and hit the lever when you’re done, like the rest of us.

I discovered this incredible waste of money in a story devoted to problems with the toilet app, which turns out to be vulnerable to hacking because the PIN code for every model — which is hardwired at the factory and can not be reset — is 0000. So, the story warns that someone else could use the same app on their phone to flush your toilet repeatedly.

So what? It’s not like your water bill is going to get outrageous. Except for someone with a backyard pool they fill every summer, who do you know who has ever said, “Wow, our water bill was really up this month”? It’s not like your natural gas heating bill after a really cold winter, or your electric bill for air conditioning after a really hot summer. Even if someone flushed your toilet twenty times in a row, you’d be out about a nickel.

The story goes on to mention other potential problems, like a prankster causing the unit to unexpectedly open and close the lid (which would certainly be distracting when a guy is taking a leak) and operate the bidet and air dry functions “causing discomfort or distress to the user.” I’ve never used a bidet because I’m an American, and it’s simply not part of our culture. I’m happy to stick with Cottonelle for those times when I need a clean-up in aisle two.

However, even if someone were to operate those functions on your luxury toilet without your knowledge, it wouldn’t be that difficult to figure out who it is — it uses a bluetooth connection, so the app user would have to be nearby. The list of suspects isn’t going to be that long. It’s either someone in your house or the guy in the next apartment on the other side of your bathroom wall.

If it’s happening while you’re the only one home, go next door and tell Jenkins to knock it off.