A Sequel We Don’t Need 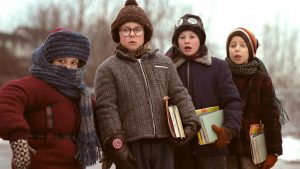 I read that HBO Max is going ahead with a sequel to the 1983 classic, “A Christmas Story.”

Its original star, Peter Billingsley, will return to play Ralphie as an adult, which moves the timeline to the 1970s. According to Deadline, he “returns to the house on Cleveland Street to deliver his kids a magical Christmas like the one he had growing up.”

What made the original work wasn’t the Old Man (Darren McGavin) putting the “fra-gil-ay” leg lamp in the window or the Bumpus’ hounds running through the house. It was the camaraderie and friendships of the young boys and their battles against Grover Dill, a frozen flagpole, and Ovaltine’s secret message. Worse, it won’t have the late, great Jean Shepherd — on whose stories the first movie was based — to narrate and keep the tone right.

I wonder whether the original movie would even get made today, considering its central plot point is young Ralphie’s desperate desire to own a gun and start shooting at random objects and imaginary bad guys. Imagine a 21st-century teacher getting that as a kid’s essay in class.