A Sad Stay At The Flamingo 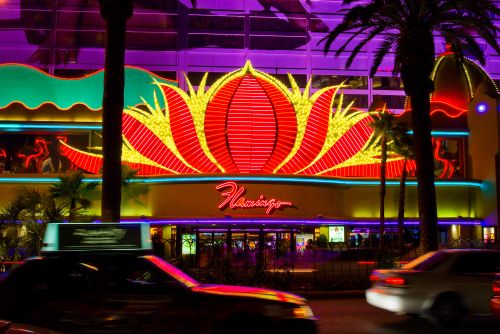 An open letter to Mark Frissora, CEO of Caesars Entertainment:

On a recent trip to Las Vegas, I stayed at your Flamingo Hotel because, as a Total Rewards member, Caesars offered me two free nights. I had stayed at the Flamingo several years ago and, while not a luxury hotel like Bellagio or Aria, it was a decent mid-strip place to stay. The rooms were clean, the coffee shop was good, and the employees were nice. But on my return, I discovered how run down the Flamingo has become.

The trouble started before I even arrived. That morning, I received an email allowing me to check-in online, but when I tried to use that portal, it refused to recognize my home address despite several attempts.

When I got to the Flamingo, I was happy to see a row of self-check-in kiosks, but when I tried one, it told me repeatedly that it couldn’t process my driver’s license. The woman on my left and the man on my right were having the same frustration with their kiosks. After my tenth attempt, I muttered and walked over to join the long line of people waiting to check in at the front desk with a human staff member.

Twenty minutes later, I was given a key to a room in the oldest tower in the Flamingo. I dragged my suitcase to the bank of elevators, where again a large group of people was waiting. It turned out that not all of the elevators were operating that day, causing a backup in the lobby. I counted eight elevator doors — why weren’t they all carrying passengers upstairs? Moreover, the “up” button on one side didn’t call elevators on the other side, so the other “up” button had to be pressed, too. What century is this?

When I was finally able to get into an elevator, I observed that the numbers for some of the floors had either been rubbed off or had fallen off. Instead of being replaced, someone had painted in the numbers with what looked like Wite-Out. Combined with the scratches and dents in the walls and doors, one word came to mind: Classy!

When I finally arrived at my assigned room, the first thing I did was check to make sure that the drapes closed all the way — essential in any Las Vegas hotel room since most of us are going to sleep well past sunrise. Nope, these had a gap in the middle and, worse, one side of the drapes was hanging down completely off the rod. Unacceptable.

I called the front desk and was told they’d move me to another room if I’d come down to the lobby to get a new key. I was informed I wouldn’t have to wait in the long check-in line, but could go right to the Key And Mail desk. I did, and a very helpful clerk was going to re-assign me to a room across the hall — on the side of the Flamingo I knew has a horrible view.

I asked if there were any “Go” rooms available, because I had stayed in one of those on my previous trip and knew they were in a different tower than the ancient wing of the hotel. She told me she could do that upgrade for $15/night, which I accepted. So much for a free room — but it wasn’t going to be free anyway, because you tack on the $30/night “resort fee” to cover the cost of not-very-fast wi-fi in the room, plus the pool I wasn’t like to jump into in February. Fine. I know Caesars is not alone in adding that ripoff charge in Vegas.

With a new key in hand, I proceeded to the Spa Elevators — which also were not all functioning, causing another delay — and when I got to the second room, discovered that it was much nicer, and the drapes closed all the way without hanging off the rod.

I also knew from previous Flamingo experience that being in the Spa Tower meant I wouldn’t have to walk the gauntlet of time-share sales people in front of the other tower’s elevators. I’m sure you have a kickback deal with Wyndham for the condos they’re trying to sell, but you have no idea how obnoxious it is to be accosted multiple times a day by their employees trying to convince your customers to stop and talk about time shares.

I’m telling you all of this because, often, the CEO of a company doesn’t really know what’s going on inside every piece of his corporate empire. I mentioned each of the problems I encountered to staff members at the Flamingo, but I’m guessing they didn’t get reported up the chain of command. I’m also sure that you’re not aware of the low state the Flamingo has fallen to, so perhaps this email will serve as a wakeup call.

I know the Flamingo is an old hotel, and that Caesars is having huge debt problems because you acquired too many properties, forcing the corporation to declare bankruptcy, but it’s a shame how you’ve allowed it to deteriorate to this level.

I assume you offered me two free nights to entice me to return to the Flamingo in the future. After this experience, I can assure you that will not happen.