A Firing, But No Fix 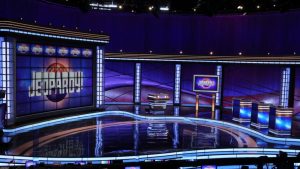 Since I’ve been commenting on the “Jeopardy!” mess for most of this year, I suppose I have to write something about Mike Richards finally being terminated as executive producer of the show (and “Wheel Of Fortune”).

The move was inevitable, despite this dumb statement from Sony executive vice president Suzanne Prete:

We had hoped that when Mike stepped down from the host position at ‘Jeopardy!’ it would have minimized the disruption and internal difficulties we have all experienced these last few weeks.

Why would you ever think that? Also, stop this lie that Richards “stepped down,” as if it was his decision. Fired is fired, and pretending it was a resignation is allowing him to retain the power. It also does a disservice to the members of the production team who had complained about Richards — voices that were ignored while Sony botched everything about this process.

That was echoed by James Holzhauer, one of the “Jeopardy!” greats, who tweeted yesterday:

According to The Hollywood Reporter, quite a few people at Richards’ former job, running “The Price Is Right,” also had bad things to say about him (read that piece here). Sony somehow never heard any of those stories in its vetting of Richards, just as it claims to have been unaware of his podcast, on which he made the multiple offensive remarks that eventually led to the rug being pulled out from under him.

Now, the company might be having second thoughts about Mayim Bialik, who has a traceable history of anti-vaxx and other controversial statements (including a NY Times op-ed she had to apologize for publicly). Is she the face the company wants appended to a game show that’s all about factual information?

As I’ve written before, the “Jeopardy!” production team still has to deal with the five episodes that Richards recorded to kick off its new season, which premieres in two weeks. Considering the spate of bad press his name is now associated with, I don’t see how they can air as scheduled. It’s technically possible to have Bialik come in and re-record everything Richards did, but that means quite a bit of masterly editing.

How about just skipping those shows entirely in the sequence of “Jeopardy!” episodes? That’s an ugly choice, too, because they’d be depriving returning champion Matt Amodio of the airtime — and prize money — he deserves, not to mention the fan base (like me) that’s been rooting for him to continue winning.

I have a feeling, based on its recent actions, that I have given all of this much more thought than Sony has. But the most important, positive note is that Richards will no longer have anything to do with America’s best-loved trivia game show.