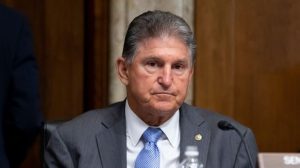 In the fifth episode of the fifth season of “The West Wing” entitled “A Constituency Of One,” Josh Lyman (Bradley Whitford) made a big mistake by not paying attention to the demands of Chris Carrick, a conservative Democratic senator from Idaho (Tom Skerritt). After being treated like a non-entity, Carrick shocked Josh and everyone else in the building by announcing he was changing his party affiliation to Republican.

Granted, this episode aired in 2003, when the GOP hadn’t been taken over by Trump and his disciples — and some of its members weren’t yet full-blown whack jobs — but I still thought about it this week amidst all the talk about Joe Manchin. He’s the Democratic senator from West Virginia who has publicly said he won’t vote to eliminate the filibuster or in favor of the voting rights bill that’s a high priority for his fellow Democrats on Capitol Hill.

Manchin is the lone Dem holding elected office in a state that was once reliably blue, but has done such a one-eighty that Trump won it by nearly 40% in 2020. So, it’s not like Manchin would hurt his re-election chances by flipping to the GOP. But doing so would cause havoc, returning majority control of the Senate to Mitch McConnell, who already has too much power and a declared agenda of not letting anything on the Biden agenda pass.

Since Manchin is a pretty reliable Democratic vote on many other issues, it would be a good idea for members of his current party to tread carefully, so as to not push him to the point where he abandons ship a la Carrick.