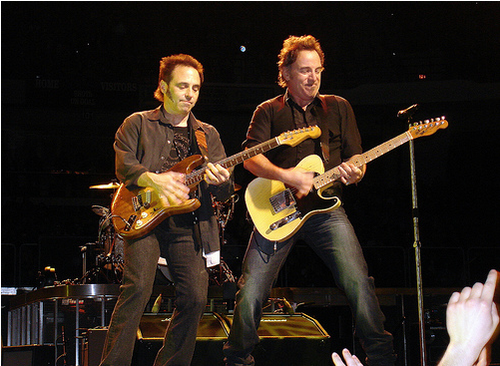 Springsteen sings about 25 songs each night on his current tour. As
with all Springsteen shows, the set list varies somewhat from night to
night, but only somewhat. Most of the songs are the same each time out,
from old standbys such as “Badlands” (and, of course, “Born to Run”) to material from his new album, “Wrecking Ball.” Which means the total number of songs he’s likely to perform on any night might range to fewer than 40.

Republicans have criticized
President Obama’s use of teleprompters; they say it betrays a kind of
scripted quality, an insincerity, even phoniness. But this seems
different. Can we reasonably expect the leader of the free world, whose
every utterance can cause an international crisis, to memorize every
word he speaks?

On the other hand, shouldn’t we expect a musician,
especially one as accomplished and experienced as Bruce Springsteen, to
know the words to 40 songs?

Your teleprompter article left out some important points. Last E Street
tour, we played 192 different songs on that tour
alone. Dozens of those songs were from audience-request signs Bruce
would collect and dump in front of the drum riser. He would then rifle
through them, sailing them around him until he found a song to attempt —
much like the college kid rummaging through the pile of dirty laundry
in search of one clean shirt.

Many songs were covers we had never performed live. EVER! He would
show us the sign and then immediately “frisbee” it down the stairs to
the teleprompter crew to surf the net and find the lyrics while we all
talked up a quick arrangement at his microphone, knowing he’d be
counting it off in 20 seconds.

Many of those audibles were Bruce songs unrehearsed or played in
years or decades. With our collective musical memory, hand signals and
teleprompter, it allows for those ambitious, ad lib moments and an
inspired, musical recklessness I believe is unique to our shows. These
points might have brought some additional perspective to your article.
In our case, the teleprompter has a much more ambitious use and purpose
than your article indicates.