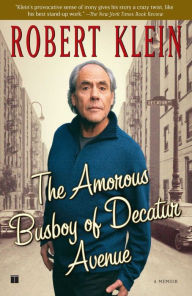 It’s been 31 years since I first saw Robert Klein in person, when my father snuck me into a nightclub I wasn’t old enough to be in (appropriately called “My Father’s Place”) to see our favorite comedian perform.  By then, Robert had released two albums, “Child of the Fifties” and “Mind Over Matter,” and I knew every routine by heart.

Last night, while preparing for his appearance on my show today, I dug out those old vinyl albums — and still remembered every word.  Klein was one of the first of the new generation of comedians who wrote their own material and based it on the world they observed, instead of just doing schtick and jokes that other people had written.  Like his contemporaries George Carlin and Richard Pryor, Klein had a special way with words and an easy relatability.

So, it was a real pleasure to spend an hour with him this afternoon, talking about his early days at The Improv, where Rodney Dangerfield was his mentor and friend — including an adventure the two had on a sailboat off Cape Cod — and other performers like Bette Midler were just starting to emerge.  He also whipped out his harmonica to answer a listener’s question about one of Klein’s signature bits, the song “I Can’t Stop My Leg.”  That led to revelations about the sexual appeal of the harmonica and his early doo-wop group, The TeenTones, who appeared on Ted Mack’s Original Amateur Hour (losing the competition to a one-armed piano-playing postal worker from Missouri!).

Turning the conversation back towards comedy, Klein shared his thoughts on Johnny Carson and Merv Griffin, whether he and Carlin were competitors, how Pryor was the best stand-up comedian he ever saw, and more.

He also told the story from his teen years of saving a kid’s life while a lifeguard in the Catskills. That’s one of the memories he wrote up in his book, “The Amorous Busboy of Decatur Avenue: A Child of the Fifties Looks Back.”  If you’ve enjoyed Klein on stage or on screen, you’ll enjoy this memoir.

Klein, who did HBO’s first-ever “On Location” comedy special back in 1975, will do his eighth show for the network in December.  He told me that he’s looking at packaging up his previous specials for a boxed set to be released next year.