Another in my continuing series of poker stories, this first appeared on Harris Online on March 4, 2011…

I’m at Caesar’s Palace, where I’m covering the NBC National Heads-Up Poker Championships and playing in some cash games on the side.

Last night, I went with Dennis Phillips to the draw party at the nightclub Pure, where the 64 players found out who their first-round opponents would be (Dennis will take on Erick Lindgren). Afterwards, several of us went next door to the poker room, where some pros and media folks were sitting down to start a no-limit hold’em game where they could play for small stakes, down a few drinks, and have some no-pressure fun.

I grabbed an empty seat, and within 2 minutes, we had a table full of people who didn’t need much introduction:

Except for Gates and Lazar, everyone had appeared (or would soon appear) on my Final Table poker radio show. The stakes were purposely small, with blinds of $1 and $3, a $6 button straddle, and a maximum buy-in $500.  I knew that the pros, particularly Moneymaker and Mercier, wouldn’t hesitate to shove their whole stack into the middle at any time.  To add to the wackiness, Chris suggested we also play the seven-deuce prop, where everyone agrees to pay $5 to any player who wins a hand while holding a 7 and 2 (the worst starting hand in hold’em).

That happened on the very first hand.

Alexander (who was very quiet and seemed uncomfortable all night in the midst of this party atmosphere) raised in mid-position to $10 and one person called. In the small blind, I looked down at 7-2 off-suit and raised it to $70 so that everyone would fold and I could collect the bounty. That’s what happened until it came around to Alexander, who looked over at me, shook his head and tossed his cards into the muck, whereupon I exposed my cards and everyone threw me a $5 red chip.

We were off and running.

Moneymaker and Mercier were moving all-in about every other hand. Hachem won a few hundred by making a ridiculous over-bet. Chips and hundred dollar bills were flying back and forth. There were side bets on big pots.

At one point, with the six and five of diamonds in my hand, I raised to $25 in mid-position. Moneymaker re-raised to $75. Morris, in the big blind, went all-in. I called. Moneymaker turned to me, jokingly said, “I hate you,” and folded. Morris and I agreed to run it twice (two complete boards), and I won both of them with a flush on top and a straight on the river, beating his ace-jack off-suit.

As if that wasn’t enough, about an hour later I got involved in the craziest hand of the night. After a couple of players limped in, I made it $25 on the button with a pair of fours. With three callers, the flop came out 422, giving me a full house. They all checked and I checked, too, planning to trap someone overplaying a smaller hand. The turn card was another 4, giving me quads. Unfortunately, no one bet, so I checked again, hoping something would come on the river to create some action.

When the river card was a 3, Eric Morris bet $70. I raised to $240, hoping he had a hand big enough to call with. He did and moved all-in.  I instantly called. He proudly announced “I have quads” and turned over 22, thinking he’d won the hand. “So do I,” I replied, as I exposed my 44 for the real winner. 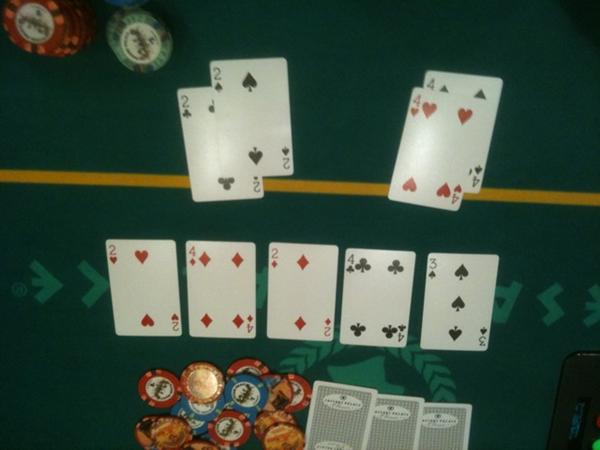 The whole table exploded in laughter. Then Gates asked if the hand qualified for the Bad Beat Jackpot. The dealer said it did, meaning there was more money involved than just the $1,200 or so I’d won in the pot.

The Bad Beat Jackpot is a promotional device many poker rooms employ. In smaller-stakes games like this, they take a dollar out of every pot which goes into a special fund. In some rooms, that fund keeps growing until someone takes a bad beat — four of a kind beaten by another four of a kind or a straight flush — and can easily grow to well over $100,000. However, Caesar’s caps their jackpot at $10,000, with 40% ($4,000) going to the player who lost the hand, 20% going to the player who won the hand ($2,000), and the other players at the table splitting the remaining 40%.

There was lots of high-fiving. Someone called the waitress over and ordered shots (I went crazy and had a Pepsi). Photos were taken. Other pros and amateurs in the room came over to see what all the excitement was about. I joked to Ali Nejad (host of “Poker After Dark” and “NBC Heads Up”) that it was ironic that at a table full of poker pros, it was two media guys who would be the biggest winners of the night — and that it happened with a bunch of players who almost never play in games small enough to qualify for the bad beat jackpot.

Everyone celebrated, except Moneymaker and Mercier, who were away from the table and, because they hadn’t been dealt in, wouldn’t share in the jackpot. Hachem, who knows (as we all do) how well Mercier’s been running lately, couldn’t help but needle him that his hot streak was finally over.

It took the floor supervisor an hour to verify the hand with surveillance, collect everyone’s IDs, fill out the paperwork (including tax forms), and finally get us paid. By then, we were all tired, so the game broke up and I went to bed, a happy winner.