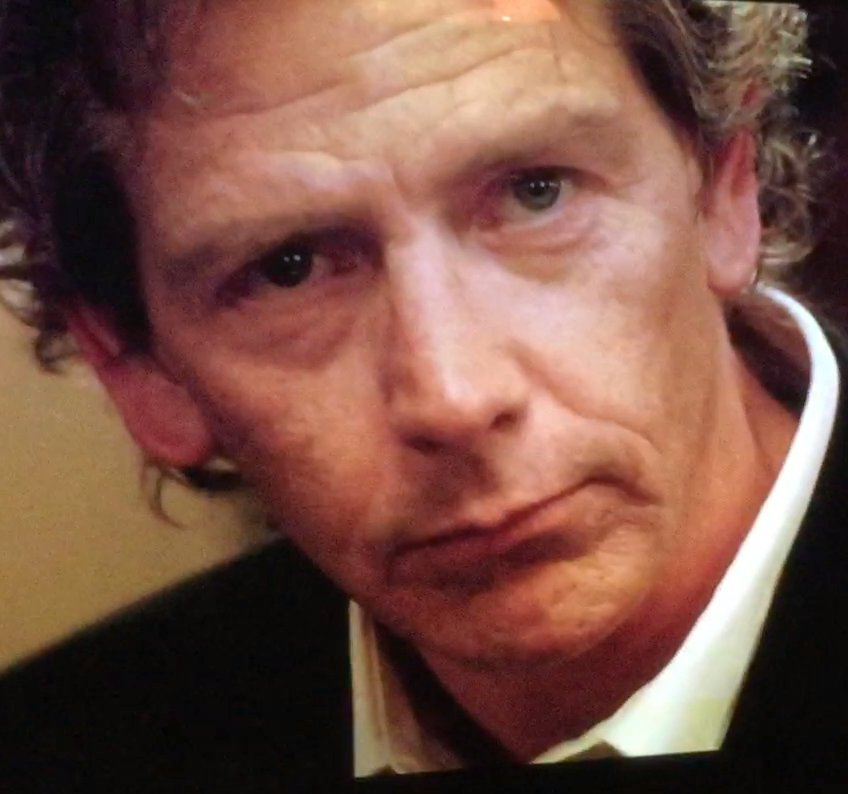 That’s Ben Mendelsohn trying to get a read on me as we play a poker hand in “Mississippi Grind,” a movie about two gamblers on the road which opens this Friday. This is Part Two of the notes I took during a long night of shooting that scene. You can read Part One here.

When they reset for the scene at my table, there are two cameras over my shoulder shooting Ben. I’m told to move an inch this way or that so they can adjust the focus for his close-up, then for some shots of the chips as he moves them, then for the cards in the middle of the table as the dealer puts them out. No one will see me from this angle. My opportunity will come later.

The dealer is a guy named Tim who works at Harrah’s New Orleans. He applied for a job there a couple of years ago, but they told him he had to get some experience first. So he got a gig as one of the hundreds of dealers at the WSOP that summer at the Rio, and impressed his bosses there so much that he was assigned to several final tables – including during the Main Event, which meant he got lots of face time on the ESPN coverage. When the folks at Harrah’s saw that, they offered him a job in their poker room.

Unlike the rest of the extras – including me – Tim gets to speak on camera, and in our scene he does exactly what he’d do in a regular game, from announcing “heads up” to the amount of a bet or raise. People who speak in the movies get more money than those who don’t.

During the down times, and during some of the long shots of the room, we’re supposed to be playing poker, so Tim deals hands and we fold, bet, check, etc. Some of the people at the table are locals who play at Harrah’s, either professionally or recreationally, and we have a good time playing the hands with the stacks of prop chips they’ve given us.

Keeping the phony game going was helpful to me because I have trouble with seasickness and, although the Mississippi wasn’t too choppy that evening, I could feel the motion getting to me when the evening started and the paddlewheeler moved up (and down) the river. Although it kept going back and forth all night, I never gave it a second thought once I was on the set and my mind could be distracted.

One of the local pros, Tony, is the poker advisor to Ryan and Anna. He tells them which chips have what value, what the stacks should look like for the scene between Ben and me, and makes sure that it looks like a real game is going on. With some kibitzing from me and the other real-life players at the table, it looks correct enough that there shouldn’t be much whining from the poker community when the movie comes out (at least about the technical aspects of this scene).

Since we were sitting there for hours, I got to know several of the other extras (although they aren’t called that — the industry term is “background”). Mark is a businessman who moved to New Orleans from New York because he couldn’t take the snow. Ryan (not Reynolds, not Fleck) is a professional actor who also plays. Cody works at a local hotel, and she occasionally does some modeling. Laurel is a local poker pro who was recruited for the movie by Tony, along with Gilbert, a restaurant consultant who plays a lot of poker.

Most of the rest of the extras are over 60, and don’t get to do much of anything except sit at their tables and pretend to have conversations. When they aren’t needed on the set, they return to the first floor of the boat, where they sit around tables talking, reading, whatever.

Many of the extras have worked on a lot of movies and TV shows in New Orleans, which attracts a lot of productions (e.g. “Grudge Match,” “Treme,” “Planet Of The Apes,” and the latest chapters in the “Jurassic Park” and “Terminator” franchises). Mark tells me that some of these have small groups of extras, like the 50-60 working tonight, while others have hundreds on the set for crowd scenes. Despite the long hours of boredom, these folks keep coming back, either for the paycheck (which can grow to $1,000 for a six-day work week if the shoot runs into overtime a lot) or for the prospect of seeing themselves on-screen.

For the extras, there are snacks available in the holding area (candy, fruit, chips, coffee, water), laid out in advance by the craft services people (the caterer). At 10pm, the contractual time for “lunch,” the boat returns to the dock and we get off to fill a plate from a little buffet that’s been set up in a tent on the riverwalk and then carry it back to the holding area on the boat. Mark tells me that he’s been on productions where everyone was served steak and shrimp, and on others where everyone got a bag lunch with a sandwich and chips. Tonight, the spread includes meatloaf and mashed potatoes and red beans and rice.

It’s a cold night – especially for New Orleans – so waiting in line behind several dozen people is no fun, especially since I know the food won’t still be hot by the time I get to the front. I’m not usually a late-night eater, so even though I haven’t eaten anything but an apple and a banana in the last 7 hours, I just grab some salad and a couple of rolls and wash them down with water.

By the way, the extras eat last. The stars, the directors, and the crew always go first. I smirk wondering if Sienna Miller, who can’t weigh more than 110 pounds, ate more than I did during lunchtime.

Tomorrow: they point the cameras at me.