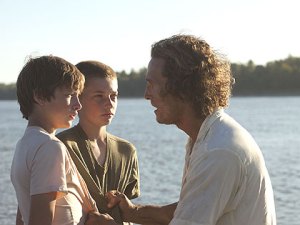 “Mud” is a movie that starts out looking like “Stand By Me,” then seems like something else, then reveals itself slowly as an adventure, a mystery, and a love story.

In rural Arkansas, two 14-year-old boys (who look just like the young Wil Wheaton and River Phoenix), set out to find a boat they’ve heard about that was swept up by a recent Mississippi River flood and deposited in a tree on a nearby island. When they get to the island, they find the vessel about 20 feet off the ground, stuck in the branches, so they climb up and scope out what they’re already thinking of as their new playhouse. Then one of them discovers some fresh mud in boot prints on the wall, and a grocery bag with a can of beans and a loaf of bread. He realizes that someone else is already living there.

If that sounds like the opening of a horror movie, it could be, but that’s exactly what “Mud” isn’t. The man who’s living in the boat turns out to be Matthew McConaghey as a mysterious character on the run from, well, we’re not sure for awhile, and I’m not going to spoil the story for you. I will say that this is an interesting character study of both the mystery man and the two boys, who get more than they bargained for out of this adventure, plus a few life lessons along the way. McConaghey and the two boys — Tye Sheridan and Jacob Lofland — carry the weight beautifully, with strong support from Sam Shepard, Michael Shannon, and Reese Witherspoon (in a small role, despite what the ads for the movie want you to believe).

“Mud” is definitely worth your time.