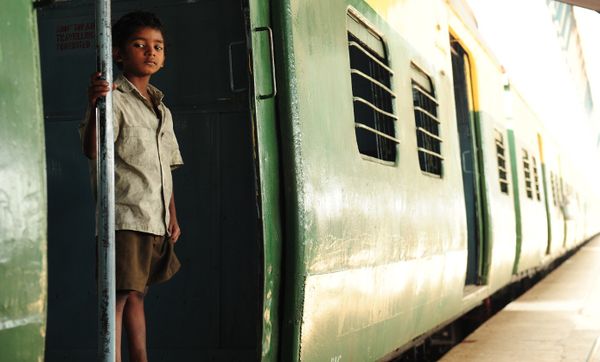 When I was a little kid, I was walking along the boardwalk at Oceanside, New York, with my parents and other family members we were visiting on July 4th weekend. Up ahead, I spotted a ferris wheel and some other rides. It looked exciting, so I told my folks I’d meet them there, and before they could say anything, I dashed ahead to check out the fun.

After walking around and soaking up the carnival atmosphere for a little while, I went to look for my parents to ask them to buy me a ticket for the ferris wheel — but I couldn’t find them. It wasn’t a particularly large area, and I knew they must have gotten there by then, yet they were nowhere to be seen. It was nighttime and I started panicking and crying, worried I’d never see them again. At one point, a police officer spotted me and calmed me down long enough to take me to the police station a couple of blocks away. I don’t remember what happened next or how long it took, but I held it together until my parents eventually wound up there and retrieved me. Then the waterworks really started.

That incident came back to me while watching “Lion,” a wonderful movie about a lost boy.

His name is Saroo, a five-year-old who lives in a very poor part of India with his mother and his older brother, Guddu. One day, Guddu tells him he’s going away to work on a farm for a few weeks, but Saroo convinces him to take him along. Guddu agrees and the two of them get on a train. When they arrive at their destination, Saroo is too tired to do anything but lie down on a bench in the train station, so Guddu tells him to stay there while he goes off to find out about the job.

When Saroo wakes up, he’s alone in the train station. He calls Guddu’s name but gets no answer, so he looks for his brother on a train that’s stopped at the platform. There’s no one onboard, so Saroo, exhausted by the search, lays down and falls back asleep. When he wakes up, the train is moving and he can’t get out of the otherwise-empty car. By the time it stops, he’s a thousand miles away from home, a little boy lost in the overcrowded city of Calcutta, where the natives speak Bengali — but Saroo only knows Hindi. What follows are heartbreaking scenes of a small boy lost on the streets of a city he doesn’t know with people who don’t speak his language, with no place to sleep and no food to eat.

That’s just the setup to the story, but I’m not going to tell you any more because, if you’re going to see “Lion,” you’re better off not knowing where the plot goes from there. All I’ll say is that, later, you’ll see Dev Patel as the older Saroo (who eventually wrote the book that “Lion” is based on), Nicole Kidman as the Australian mother who raises him, and Rooney Mara as his girlfriend.

Patel and Kidman are getting some awards attention for their performances, but the best work in the movie is done by Sunny Pawar, who plays 5-year-old Saroo. It’s the best screen performance I’ve seen by a little kid since “The Jungle Book” earlier this year.

While my lost-boy experience pales in comparison to Saroo’s, “Lion” brought back a flood of memories that made me connect with him — thanks to the work of rookie director Garth Davis and screenwriter Luke Davies — and the shots of the real people during the end credits made me well up again.