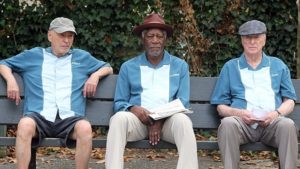 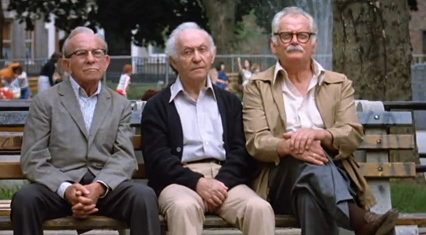 In 1979, director Martin Brest (who would go on to make “Beverly Hills Cop,” “Midnight Run,” and “Scent Of A Woman”) made a little movie called “Going In Style.” It starred three veteran actors: George Burns, who had resurrected his career a few years earlier with “The Sunshine Boys” and “Oh, God”; Art Carney, the “Honeymooners” sidekick who had returned to stardom with “Harry and Tonto” and “The Late Show”; and Lee Strasberg, one of the most famous acting teachers ever, who played an important role in “The Godfather 2.”

The story was simple. Three old retired men live together, go to the park together, and basically just hang around together, collecting their social security and pension checks. Bored of sitting on a bench with not much else to do, on a whim, they decide to rob a bank. After one of them dies from the excitement, the other two go to Vegas for a short adventure. That’s too much for another one of them, who dies in his sleep. Then the third one is caught by the cops. It was a wonderful, quiet character study with three actors who never over-played their parts.

But Hollywood can’t leave well enough alone, so they had to remake it. The new version stars three actors who also have resumes full of great performances: Morgan Freeman (“Driving Miss Daisy,” “The Shawshank Redemption”), Michael Caine (“Educating Rita,” “Alfie”), and Alan Arkin (“Wait Until Dark,” “The Russians Are Coming”).

Unfortunately, they were given a script that’s not a small character study (a disappointment because it was written by Theodore Melfi, who made “Hidden Figures,” my favorite movie so far this year), but a revenge fantasy. This time, the guys decide to rob the bank because it’s foreclosing on Caine’s house and managing the pension fund that’s no longer sending them checks. Instead of playing characters with nuance, they were given roles that could be played by any actor over 70, because there’s nothing special about them.

Zach Braff directs all of this with no style at all, substituting a broad, wacky sitcom pace and some dumb subplots. There’s Christopher Lloyd doing yet another version of Reverend Jim and Doc Brown as a flaky old guy. Ann-Margret is back as a romantic interest, just as she was in Grumpy Old Men. The three guys smoke a joint and laugh hysterically.

Worst of all, there’s an extended sequence in which, supposedly as a rehearsal for the bank robbery, they shoplift at the supermarket where Ann-Marget works. But they don’t go in and rob the cashiers, which would make a little bit of sense. Instead, they go around the store and stuff items into their pants and jackets — because there’s nothing funnier than the sight of old men without money having to steal food so they can eat — then make a slapstick getaway that’s completely unnecessary.

It’s all formulaic, predictable, and has a copout happy ending that’s contrary to everything the original did right. In fact, if this were the first version, it would never be remade.

I’m giving the new “Going In Style” a 3 out of 10, and only because I like the stars, not the movie. Instead of wasting your money on the remake, rent the original on Amazon Prime Video for a few bucks and see how good it was.