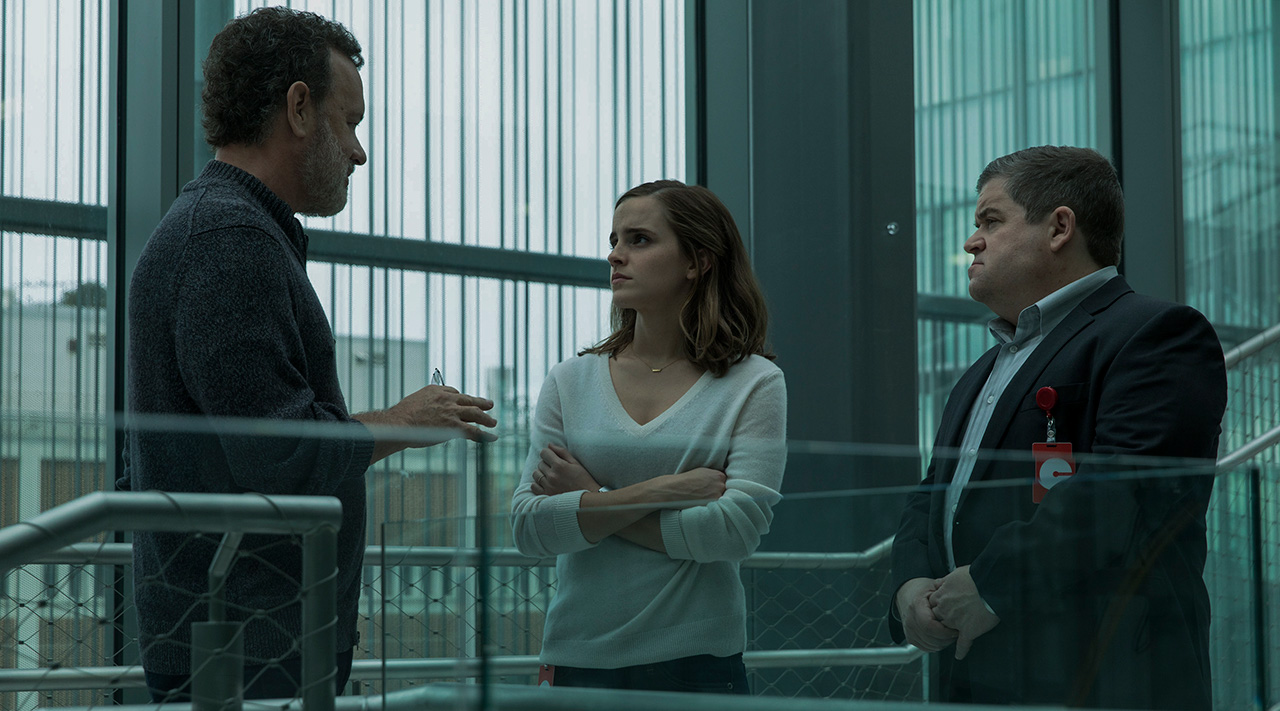 The Circle is a social media company — think Facebook + Google + Twitter — where Emma Watson is hired as a “customer experience” assistant. It is run by CEO Tom Hanks and COO Patton Oswalt with the intent of not only connecting everyone, but learning everything about them. Hanks plays the kind of Silicon Valley titan who makes you think he cares only about what’s good for you (and society), but actually wants all that information so he can monetize it and acquire more power.

As a “guppy” at The Circle, it takes Watson a little while to become acclimated to the share-everything culture, but once she buys in, she’s in all the way. She agrees to wear one of Hanks’ tiny new cameras that will show the world — or whoever chooses to follow her — everywhere she goes and everything she does, becoming the ultimate connected millennial.

We already live in a world where hundreds of millions of humans have no reluctance to share too much of their lives online — no, I don’t care about the best ten concerts you’ve ever seen or what you had for dinner last night — and in “The Circle,” they become a global cult of participants willing to forsake even more of their privacy. The movie seems like it’s going to bring all of that to a head, but it kind of peters out after a confrontation too minor to qualify as a resolution.

Up until that point, however, “The Circle” is akin to the Netflix series “Black Mirror” (if you haven’t watched that series yet, add it to your queue!) in its savvy use of technology and social media.

“The Circle” really belongs to Watson, who is very good as the young woman who buys into the hype of this new openness. Hanks does more with this role than he did in his last movie, “A Hologram For The King,” which was also based on a Dave Eggers book, and I always enjoy seeing Patton Oswalt as an efficient sleazeball who never lets you know what’s really going on (if you haven’t seen him in “Young Adult” and “Big Fan,” which I reviewed here when I added them to my Movies You Might Not Know list, add those to your queue, too).

The supporting cast includes Glenne Headly and Bill Paxton (in one of his final roles) as Watson’s parents, who get dragged into her new life. John Boyega (“The Force Awakens”) plays another one of the founders of The Circle, but his part must have been cut way down in the editing room, because he doesn’t have much to do in the final version. Nate Corddry appears to conduct a job interview with Watson with questions that will make you cringe, and Ellar Coltrane (who played the kid who grew up over a dozen years in “Boyhood”) is Watson’s old friend who wants nothing to do with her plugged-in world.

While I liked some of the clever things “The Circle” has to say about the dangers of the modern sharing culture, I wish it had ramped up the stakes and found a more satisfying conclusion. I give it a 7 out of 10.