Movie On A Deadline 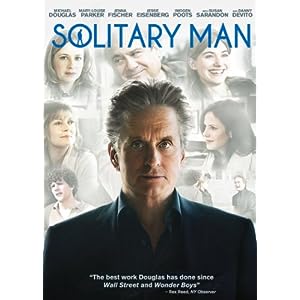 I rented a movie to watch on a flight the other night, but because I didn’t take my laptop it had to be something compatible with the smaller screen of my iPhone. That meant nothing with big action and special effects like “Iron Man 2

I went to the iTunes store and rented “Solitary Man

,” a character study Michael Douglas as a 60-year-old man who finds himself alone — no job, no real prospects, an ex-wife he can’t live with anymore, an apartment he can’t pay for, and nothing much more than the charisma he has long used to talk younger women into bed. Douglas does a very good job, ably supported by Susan Sarandon, Danny DeVito, Mary Louise Parker, Jenna Fischer, Jesse Eisenberg, and an impressive newcomer named Imogen Poots.

But here’s what I didn’t like: the restrictions on watching the movie. The rule for movies rented from the iTunes store is that you have 30 days to enjoy the movie, but once you start watching it, you only have 24 hours before it dissolves into thin air (at which time, the secretary will disavow any knowledge of your IMF activity).

So, when I started watching the movie on the plane Thursday night, if I had stopped an hour in and decided to sleep the rest of the way, intending to watch the remainder of the movie on my flight home Sunday night, it would have been impossible unless I re-rented the movie. I bet this happens to a lot of people who download a film to watch on the road, perhaps in their hotel room, but then something else comes up and they never get to finish it before it disappears back into the cloud.

That viewing window should be extended from 24 hours to 7 days. After all, Apple and the movie studio already have the $3.99 I paid for the rental, regardless of when I watch it. And it’s not likely that I’m going to watch it repeatedly over the course of a week (unless I had a small child who insisted on seeing “Toy Story 3

” over and over again during vacation). Even if I did, how does that affect their bottom line?

As it turned out, I did watch the entire movie during that first flight, and enjoyed it enough to add it to my Movies You Might Not Know list — which does not have a time limit on your perusal.