With the movie “Molly’s Game” (starring Jessica Chastain, written and directed by Aaron Sorkin) opening today (listen to my review here), here’s my 2014 conversation with Molly Bloom, the former underground high-stakes poker game organizer, who wrote about her experiences in the book the movie is based on… 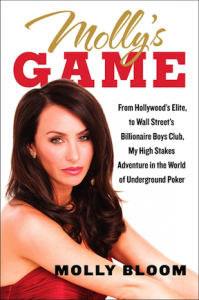