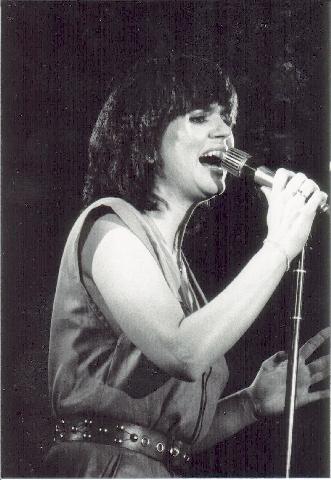 So sad to hear that Linda Ronstadt will never sing again. She said in an interview yesterday that she has Parkinson’s Disease, which makes it impossible to control the muscles that let her sing. She also suffers from hand tremors and has to use a wheelchair.

My father died of a disease related to Parkinson’s, and it was heartbreaking to see his body breaking down even though his mind was still intact. Although Ronstadt, who is 67, hasn’t released an album in 7 years, it must be driving her crazy not to be able to sing. That’s what singers want to do — even if they’re not singing professionally anymore.

I saw Ronstadt a couple of times at the peak of her fame in the late 1970s, and remember how shocked I was the first time. I had never seen her on TV, and this was long before music videos, so the only way I knew her was from her songs on the radio. When she stepped out onto the stage, she was tiny — barely five feet tall — but the voice that came out of that body was so powerful it would have filled the venue without amplification.

She was versatile, too, winning 11 Grammys for pop performances, country performances, Mexican-American performances, tropical Latin performances, and children’s albums, plus a Tony Award for “Pirates of Penzance.” Now that once-amazing vocalist can no longer do what she loves.