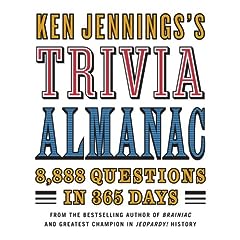 “Jeopardy” champion Ken Jennings was back on my show this afternoon to talk about his newly-published Trivia Almanac.

We talked about the “Jeopardy” history Ken and my mother have in common, his appearances on “1 vs. 100” and “Grand Slam,” and what happened to the game show he was going to do for Comedy Central. We also did a bunch of trivia out of his book with some of my listeners.