Justin Hayward of The Moody Blues 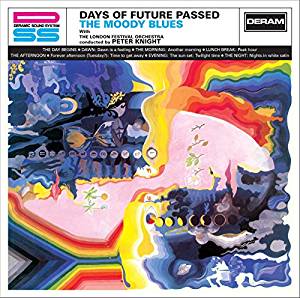 Harris: We just played Justin Hayward and John Lodge recorded when we did a show live from Bill Wyman’s Sticky Fingers Cafe in London on June 25, 1990 — a terrific acoustic one-guitar version of Tuesday Afternoon. And now. Justin Hayward joins us live from somewhere in the south of France.

Harris: Good morning, Justin. So, what did you think while you were listening to that? Was that a good day for you, the day you did that for us?

Hayward: Yeah, I can remember it. You know, those are always a bit crazy situations when you walk into it because you guys are always kind of really vibing, you know the score of what is going on. So, but it’s always enjoyable, and particularly if it’s a live show. Because it keeps you on your toes, kind of thing.

Harris: What was great about that day was we handed John the guitar about 45 seconds before we said, “Could you do something for us?” and…boom! You guys pulled it off. Is that your favorite Moody Blues song?

Hayward: At the moment, I think the one that I enjoy playing is a song called I Know You’re Out There Somewhere. I just go through different phases, but I like playing that one on stage. It gets the crowd going. They really love it.

Harris: When you wrote I Know You’re Out There Somewhere, was there some sort of stalker going through your mind?

Hayward: Well, we always call it I Know You’re Out There, So What. I think it just was one of those things where everyone wants to know what happened to the first person they ever really loved. Best not to find out. Best to leave it as a nice memory.

Harris: Absolutely, yeah. I agree with you. Is there a Moody Blues song that you would like to never perform again? That you’re just a little bit sick of?

Hayward: No, I don’t think so. No, I think that before I go on stage sometimes. Ah, I can’t do that again, you know, but when you get on there. This stuff means a lot to a lot of people. The fact that you’ve got something that you can share every night that makes people happy. I mean, I know it sounds corny, but you get a big kick out of that.

Harris: Well, that’s great that you feel that way. A lot of people are coming to see you at the Nissan Pavilion at Stone Ridge on June 12. The tickets are on sale now. You’re going to be performing with the Prince William Symphony when you come here. You guys started this about five or six years ago with the concert at Red Rocks which a lot of people saw on PBS. Years ago, when you did Days of Future Passed with Tuesday Afternoon and others, that was one of the first concept albums and I believe was the first rock album to have a symphony orchestra behind it. Now you’re touring with them again. Is it different performing as a rock ‘n’ roll band knowing you’ve got a string section behind you?

Hayward: Yes, very different. You have to keep the discipline, because the orchestra is going to play exactly as written. You can’t change things. You’ve got to be exactly right on the button with what you play. You can’t take any kind of liberties. But I enjoy that. It’s a framework where you know exactly where you are. I think the orchestras really enjoy it too. It’s a different perspective altogether. You have to leave a kind of space for the orchestra to breathe. It’s a show that we really love doing and you know particularly in this way where you are playing with a different orchestra every night. This is like a six, seven, eight week tour that we are going on. So, we are going to be meeting a lot of different musicians and it’s very exciting.

Harris: You ever run into any maverick orchestras or musicians? Like the oboe guy comes up to you, “Hey, I’ve got to solo tonight!”??

Hayward: You know, sometimes you see them waving their cor anglais [English horn] over their head you know after they get into it a little bit. A lot of them, I mean the string players they’re funny. Two guys came up to me one day from an orchestra and they were saying [funny accent] “I never really know much about the Moody Blues, but I love that song that goes da de da de da de da….” I thought, “Oh, yeah, they mean Nights in White Satin.” But they were only listening to the string part! They wouldn’t bother with the rest of it.

Harris: Does the string section bring their own roadies? How does that work?

Hayward: I don’t want to offend anyone here. This is what it’s like. It’s a little bit like school. So you have to be strict in a way and lay down the rules first thing in the morning. So that they know what the parameters are, because otherwise you get 60 to 80 people wandering around not quite knowing. There has to be an element of discipline throughout the whole day. I think it’s very tiring for them. And it’s only sort of the next day they wake up and they think, “What was that? What did we do?” And then it kind of hits them what it was all about.

Harris: I would think it would be an unbelievable experience for these folks in the Prince William Symphony. Do they get a rehearsal with you in the afternoon and then a performance that night?

Hayward: No. A few years ago when we started this idea, we thought that would be the way to do it. What happens – they get the parts up front. The more conscientious orchestras will look at those parts and try them in sections. What usually happens is that they just have a runthrough of the whole show on the day without us, to a tape. First they play their own parts to time, then they listen to a tape of us. Because we found out when we first started doing this if we turned up at the sound check and we played along with them, they spent most of the time looking at us, seeing what we were doing and watching us sort of like perform in our own way and it was very distracting for them.

Harris: So the first time they see you is when you walk out on stage together?

Harris: Wow. That’s got to be terrific. That must have an unbelievable electric feel for everybody on the stage.

Hayward: Absolutely. It’s very exciting. It’s a risk. Every night it’s a risk. When your life is risky like that it’s more enjoyable.

Harris: Yeah. How are things with the new album? I know you guys have been working on songs for a couple of years. When are we going to see a new Moodies album?

Hayward: We started working not far from where I am now down in Genoa just a few weeks ago. It’s a studio. I did a solo album down here towards the end of last year which comes out actually during the tour. So, I should be sort of promoting that as well. We just started work on a new Moodies album in the same place. Because the other guys really liked it when they came and had a look.

Harris: When will we see that?

Hayward: That’ll be out probably this time next year. March, April next year.

Harris: Your album covers, back to Days of Future Passed and the early ’70s and mid-’70s, were always unbelievably extravagant, and works of art unto themselves. Now with CDs being only a few inches by a few inches, has that art been lost?

Hayward: Yes. Yes it has. I went through that exercise just recently with my own thing. Because I thought it’d be fabulous to go back to a proper kind of painting. And when you’ve reduced it in size, it doesn’t have the same impact. You have to have a definite logo or symbol or image on the front of a CD for it to mean anything. Because to have an intricate piece of art with detail in it, it just doesn’t work anymore. People just don’t stop and look at them anymore the way that they used to on a 12 by 12 piece of card. It’s a shame. There you go.

Harris: Now that it’s so small, you really only have enough room to put, “Hey Moodies!!” on there.

Hayward: When we first came to America, I think we first came there in 1968, we were very lucky to be one of the few English bands that really made it. I know I used to love playing with all of those bands. We did a tour with a group called It’s A Beautiful Day. They were just so great. But then also a year or so after that we did a tour with some of our heroes which were in a group called Poco. They influenced us right from the Buffalo Springfield times, the guys who came out of Buffalo Springfield and into Poco. I think I’d like to be with them. I’d like to have played with them.

Harris: Justin, you’re always a terrific guest. I appreciate you taking the time. Although, it must not be too hard sitting there in the south of France. It’s the early afternoon there. Probably a beautiful day.

Harris: Well after he’s done with us he’s running down to the topless beach. He’s got a rough life there.

Hayward: No, I won’t be running. I don’t want to see anybody topless, running.