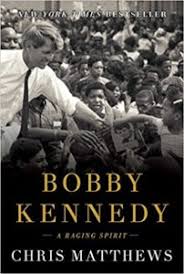 Next year marks the 50th anniversary of the assassination of Robert F. Kennedy, who was then three years into his first term as a US Senator, and just 80 days into his candidacy for president of the United States. Chris Matthews, the host of MSNBC’s Hardball, has written about RFK’s brother in the books “Jack Kennedy—Elusive Hero” and “Kennedy and Nixon,” and now has published “Bobby Kennedy: A Raging Spirit.” In our conversation about the book, the topics we covered included: