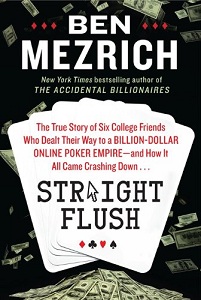 Now he’s back with “Straight Flush: The True Story of 6 College Friends Who Dealt Their Way To a Billion-Dollar Online Poker Empire, and How It All Came Crashing Down,” so I invited him to my America Weekend show to talk about it.

The book is the story of Scott Tom and his frat buddies who started Absolute Poker, where lots of Americans played poker online — although it was nowhere near as big as PokerStars or Full Tilt Poker — before the government pulled the plug on all online poker sites on April 15, 2011. Even before that, AP had serious problems with cash flow, payment processing, and a cheating scandal that went to the top. I asked Mezrich about all of that, as well as: