Andy Friendly, “Willing To Be Lucky” 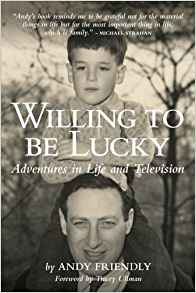 What do Richard Pryor, Tom Snyder, Johnny Carson, Roseanne, and Dick Cavett have in common? They all worked with my guest, Andy Friendly, who spent over forty years writing, producing, directing, and overseeing television shows and movies as an executive, creating content for NBC, CBS, ABC, Discovery, PBS, King World, Paramount, MGM, and others. Now he has written about his career in a new book called, “Willing To Be Lucky: Adventures In Life and Television.”

We started off talking about Tom Snyder, a towering TV personality whose work I enjoyed for many years as host of the “Tomorrow” show on NBC. Then we moved on to “Good Night and Good Luck,” the movie George Clooney directed and starred in as Andy’s father, legendary CBS news producer Fred Friendly, opposite David Straitharn as Edward R. Murrow.

I could easily have talked with Andy for several hours about his remarkable life, but we only had time at the end for a great story about a crisis involving a white pinstriped suit Richard Pryor insisted on wearing onstage for his third concert movie, “Here and Now,” which Andy produced.