An Evening With Tony Bennett 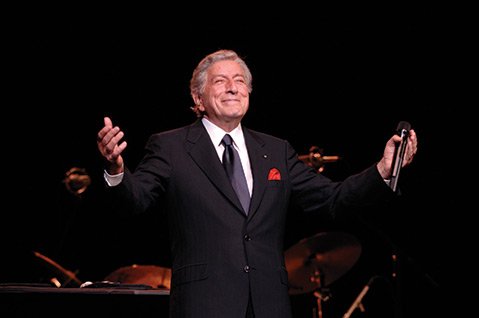 Last night, my wife and I went to see Tony Bennett in concert. Along with Ray Charles, who we saw a quarter-century ago, Bennett is one of the few non-rock music legends I’ve always wanted to see — and since he’s 89 years old, we realized this was probably our last chance.

Over the course of 75 minutes, Bennett sang a couple dozen songs from the great American songbook (George Gershwin, Duke Ellington, Irving Berlin, Cy Coleman) while giving a masterclass in how to entertain. Impeccably dressed, he effortlessly moved through each song, leaving a few seconds for applause before launching into the next. Bennett was supported by a quartet of terrific jazz musicians, and he gave each of them ample time to solo while making sure the crowd gave them their due. With a simple hand gesture, or a nod, he encouraged us to appreciate what we were hearing and seeing.

Meanwhile, he sang beautifully, with that unique Tony Bennett phrasing and perfect pitch. After seven decades in the business, this old-fashioned crooner knows how to use his voice so well that, at one point, he did something I’ve never seen a singer do — he put the microphone down on the piano and filled the 1,200-seat hall with his voice as he sang “Fly Me To The Moon,” with nothing more than soft accompaniment by his guitarist.

After the obligatory “I Left My Heart In San Francisco,” Bennett left the stage to a standing ovation, but returned moments later to treat us to a half-dozen more songs. For the close, he said he was going to sing one of his all-time favorite songs, a tune which he’d had to fight his record company to release in 1959 because it was so old. But when it came out, Bennett’s version was such a hit that he received a note from Switzerland from the songwriter: “Dear Tony, thank you for resurrecting my song.” It was signed by Charlie Chaplin, who had composed “Smile” for his classic movie “Modern Times” in 1936.

Hard to believe that a boy who was 10 years old when that movie premiered is still going strong, still filling seats, and still selling millions of albums in 2015. Tony Bennett is proof that quality and class never go out of style.